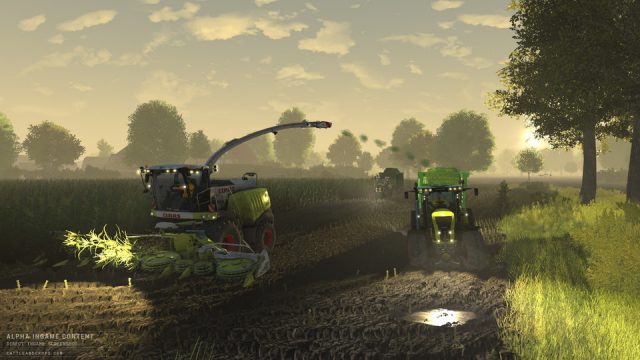 In this update we have further optimized the AI and fixed some bugs that had been reported.
We’ve also included a new mission with over an hour of pure gameplay.

At the moment we are primarily working on the new savegame system, the AI, user interface and more reported bugs. Some of the quest steps have also been revised and a German translation has been added.
The new map is currently being tested concerning the AI and is adjusted accordingly.
Regarding the further steps and the Early Access version: if everything works as planned, we will release the new map with the next update. Then, together with you, we will check how good everything works together. More improvements, adjustments and features will be combined in a new version. Following this, we will release that version on Steam.
Further improvements, changes and fixes for bugs you have reported can be found in the changelog as always.
We hope you have fun testing!

NEW Big mission, where you can play a complete season (cultivating, plowing, seeding, fertilizing & harvest)
NEW The new addition for the cockpit camera is the shoulder check function. It can be enabled and disabled in the camera options
NEW The quests have been slightly revised. The quest texts are now also available in German
NEW Collision prevention between two drivers/chasers on the field
NEW Multiple chasers/drivers per field
NEW The slurry wagon Stapel VT 18000 can now be maneuvered by an employee in a tractor/machine combination
NEW The Dammann Land Cruiser can now be maneuvered by an employee
BUG FIX The disks and prongs of the Köckerling Rebell don’t shake any longer when driving on a road
BUG FIX If you have more than one CornKing, the parts of the inactive vehicle don’t shake any longer, when another machine is working on the field
BUG FIX The lane marker of the CornKing is now functional
BUG FIX Stapel VT 18000: The problems that occurred when attaching and detaching the slurry wagon have been fixed
BUG FIX If you have more than one Jaguar, you won’t hear the sound of the first machine any longer while sitting in the other vehicle
BUG FIX The Arion can cultivate again on seeded ground
BUG FIX The issue with the hydraulics attacher shifting over time has been fixed
BUG FIX The setting back of the turn signal now also works with attached machinery
BUG FIX When harvesting, there are no more remnant plants left behind on the edge of the field
BUG FIX The helper markers for the fields work again (e.g. for the plowing tutorial)
BUG FIX You can now assemble tractor/trailer combinations at the trader
BUG FIX Harvest task: The employee should now be able to handle two chasers/drivers better
CHANGE The shaders for water and ground have been reworked. When humidity influences the soil, the forming of puddles happens at a later time
CHANGE The application volume of the fertilize controller has been reduced, decreasing the formation of puddles on fields after spraying
CHANGE Getting stuck in a vehicle has been revised: the relation between the values and the soil parameters (humidity) has been improved
CHANGE When the mirrors are deactivated, all the associated remote portals are switched off as well
CHANGE When the plants aren’t rendered after max distance, the fruit colors are rendered by the terrain shader
CHANGE The loading of animals has been improved

One thought on “Another Cattle and Crops update”