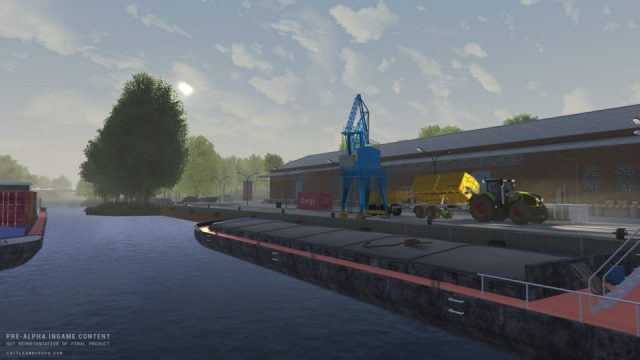 After the last update you have reported that the performance drops heavily on certain systems when all the machines of the Season One Quest are standing on the farmyard. We have begun to search for the causes of this problem and already could find and fix some of them. We will probably release a performance update regarding this topic next week. Therein included will be enhanced graphics options for texture resolution and shadows to improve the performance.

In the course of this optimization we wanted to adjust all machines and objects, for example the hiding of control buttons in an Arion after 5 meters or the revision of LOD stages and textures. While doing so, we noticed that some components had distorted textures after being edited and saved in the editor and therefore were displayed wrongly. We try to fix this engine problem at the moment, so we can optimize all assets regarding the performance and the new map runs smoothly for as many users as possible.
Unfortunately, the current savegame system isn’t functional, machines are only sporadically saved and flawed at that. For the last few weeks we have been working on a completely new system which is also multi-map ready. This means you will be able to successfully save, transfer your machines to other maps and continue working there. Finances, vehicle fleet etc. are saved in a central profile, separate from the maps. We hope to give you a working version for the internal EA.

We are almost finished with the bug tracker. Since we have decided to use our own system, this takes more time to develop, but it gives us better options for overview, reporting and processing. With this tool you will have a better insight into the development, what we are working on at the moment and what will be released with which milestone. We will also incorporate some of your feature wishes. We are planning to release the tracker together with the EA version.
Our plan to create the community Early Access version in November is being delayed due to the above mentioned circumstances and the recently reported bugs. If nothing intervenes, we can make the pre version 0.1 available to you mid-December. The Steam version v0.1.1 will be released in January at the earliest. We can’t give you a date for the final v1.0 at the moment.